The "Golden Sceptre" for Józef Wilkoń

Józef Wilkoń - a graphic artist, painter, sculptor and one of the world's best known book illustrators has been awarded the "Golden Sceptre" in 2010. The artist received the award for "works full of a subtle balance between perfect technique and simplicity of the humanistic message".

The "Small Sceptre" for a young artist, taking the master's route, was awarded to graphic artist Mateusz Dąbrowski, Teaching Assistant at the Warsaw Fine Arts Academy. The award-giving ceremony, which took place on 22 November in the National Theatre in Warsaw, was accompanied by an exhibition of Wilkoń's sculptures and graphics, and a special concert titled "Music Among Beasts" was given by: Tomasz Stańko, Joszko Broda, Joachim Mencel, Marcin Pospieszalski and Robert Usewicz.

One of the most eminent and World-acclaimed book illustrators and graphic artists. Mr Wilkoń was born on 12 February 1930 in Bogucice near Wieliczka. He began his education in art in the Fine Arts Lyceum in Kraków, together with Roman Cieślewicz and Franciszek Starowieyski. He continued his education in the Academy of Fine Arts in Kraków in the class of Professor Adam Marczyński (graduated in 1955) and taking a course in history of art in the Jagiellonian University (graduated in 1954). After moving to Warsaw Mr Wilkoń started illustrating and creating the graphic layout of books. Apart from books he also illustrates magazines, postcards, calendars, stage set designs and tapestries. Over the years he has illustrated more than 100 books for children and adults in Poland and over 80 abroad, including Germany, Switzerland, Italy, France, Sweden and in Japan, where the fans of his talent have established a museum of his art.

Mr Wilkoń received many awards, including a 1974 State Award for creativity for children; the 2005 Award of the Minister of Culture for his entire work, as well as foreign awards: Deutscher Jugendbuchpreis 1964, an award in Japan in 1984, The Honorary Award in Buenos Aires 1965, the Gold Medal and honorary prize in Bratislava 1969 and 1973, Premio Grafico in Bologna 1974, Andersen Premio in Geneva 1998, to mention merely the most important ones. He also painted a lot, taking part in collective and individual exhibitions, his first personal exhibition taking place in Warsaw in 1960.

Over ten years ago Józef Wilkoń took up sculpting, initially small clay figures, depicting the animals from his tales. The sculptures began to be bigger in size and then the artist started to carve them from wood. Roughly hewn tree trunks were transformed by his hand into animals, birds, amphibians, reptiles and insects full of life and character. They make a wonderful "Cupboard with birds" and the huge "Wilkoń's Ark", forming "spatial illustrations" to quote the author. They were displayed in the Warsaw Zachęta gallery in 2006.

After the end of the Zachęta exhibition the "Ark" was moved to the park of the palace in Radziejowice as permanent exhibits. In 2009 in order to preserve and promote the artist's works the Józef Wilkoń "Arka" Foundation was established.

Mr Wilkoń emphasises that since his early childhood fascination with the fauna and its in-depth observation was of fundamental importance for his life and work. 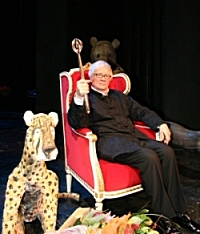