The "Golden Sceptre" for Jerzy Giedroyć

During the years 1929-1935 he was press and parliamentary clerk in the Ministry of Agriculture, then Chief of the Presidial Department of the Ministry of Industry and Trade (until 1939), as well as editor of the "Dzień Akademicki" magazine and the biweekly "Bunt Młodych", transformed into the weekly "Polityka".

Born 27 July 1906 in Mińsk Litewski. He graduated in law and history at the Warsaw University. At University he was President of the "Korporacja Patria" and "Koło Międzykorporacyjne" society in Warsaw, an activist of the "Myśl Mocarstwowa" academic organisation and on the staff of the foreign department of the Chief Academic Committee of the Polish Union of Academic Youth. After WW II broke out he was personal secretary to the Polish Ambassador in Romania, Head of the Polish section of the Chilean Mission in Bucharest as well as cooperating with the English Mission, dealing with Polish matters in Romania. He was taken by the English Mission to Istanbul in March 1941, volunteered for military service and left for Palestine. As a soldier of the Autonomous Carpathian Rifle Brigade he fought in the Libyan campaign and at Tobruk. He headed the Military Periodicals and Publications Department of the Propaganda Bureau of the 2nd Polish Corps, worked for the Tank Training Centre in Gallipoli (Italy), and then Director of the European Department of the Ministry of Information of the Government of the Republic of Poland in London.

Jerzy Giedroyć was also the founder of the Literary institute in Rome as well as publisher and editor-in-chief of the "Kultura" magazine. In October 1947 he moved the publishing house to Maisons Laffitte outside Paris and developed extensive publishing activity, cooperating with eminent Polish émigré journalists and writers. He initiated the Kultura Library, now numbering 500 volumes (literary works as well as political books and diaries) as well as the "Zeszyty Historyczne" publications (latest history of Poland and Central European countries) as well as authoring numerous articles and the book "Autobiography for four hands".

He was initiator and member of the Independent Polish Literature and Science Assistance Fund, created in early 1982, member of the editorial team of the "Continent" Russian dissident magazine as well as of the board of the Ukrainian quarterly "Widnowa". J. Giedroyć also participated in numerous actions undertaken in the West to support free culture. He consistently strived - for 50 years - to have Poland pursue good neighbourly relations with her Eastern neighbours: Lithuania, Belarus and Ukraine - with a view to regaining by these countries of their independence.

Jerzy Giedroyć was awarded honorary degrees from the following universities: Jagiellonian, in Freiburg (Switzerland), Wrocławski, in Białystok and Warsaw. He is also Honorary Member of the Polish Historical Society, winner of the Polish PEN Club award, the St. Brother Albert award, the "Polityka" award as well as the Golden Sceptre award from the Polish Culture Foundation and Bank Millennium. 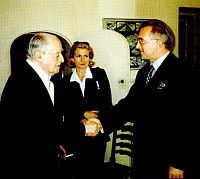