The "Golden Sceptre" for Ewa Podleś

Polish Culture Foundation and Bank Millennium grant "Golden Sceptre" to Ms Ewa Podleś for mastery, masterly vocal sills, musical culture, for consistent artistic choices that allow Poland and Poles to feel proud of the only authentic counter-alto in the world(Excerpt from the verdict of the "Golden Sceptre" Chapter).

The old, beautiful interiors of Stanisławowski Theatre in the Royal Łazienki Park in Warsaw constituted a unique scenery for the award ceremony of this year's, 5th in the history, "Golden Sceptre". The prestige of the award established by the Polish Culture Foundation and Bank Millennium has been built by its to-date winners: editor Jerzy Giedroyc, composer Wojciech Kilar, writer Stanisław Lem and film director Roman Polański and its accompanying special concerts or programmes, which became true cultural events. It is also of importance that the winner, apart from a sculpture of outstanding beauty authored by professor Krzysztof Nitsch, receives an award in the amount of one hundred thousand PLN (the highest one in Poland) and a possibility to grant a special award of ten thousand PLN to a young promising artist of one's choice.

Ewa Podleś is a world famous artist. She was educated in Warsaw, has been present at the most important opera and concert halls of the world, has recorded for the best record producers, has been awarded at the most important contests. The key to her world successes, apart from the preparation in the F. Chopin Musical Academy, which she has frequently underscored, is a wonderful, rare voice - counter-alto. The most authentic counter-alto of the generation - as it was dubbed by international critics. But this is not all. Immense vocal and performing culture make Ewa Podleś's concerts real spectacles. The artist does not avoid difficult repertoire - she participated in great performances of classical masterpieces (by Rossini, Haendel, Mahler, Chopin), contemporary composers (the first world's performance of Te Deum by Penderecki) and also, wherever she could, she has been popularising the works of Polish composers. For this special evening in Stanisławowski Theatre the artist chose three hymns for the poems by Jan Kasprowicz with music by Karol Szymanowski. They had been originally staged in Carnegie Hall in New York and in Poland the work was performed for the first time.

This was a great concert. Ewa Podleś fully confirmed her class as a singer, but also as an artist fully aware of her mission. Indeed, rarely can we hear such a simple and beautifully pronounced artistic credo. The winner of the "small award" selected by the singer, Bartosz Koziak, a young but already outstanding cellist, student of the 4th year in the Musical Academy in Warsaw, fully matched the class of Ewa Podleś.

In the finale the artist yet again shone in her showpiece aria of Isabel for the opera "L'Italiana in Algieri" by Rosinni, with standing ovations. The chamber concert, which gathered in the Stanisławowski Theatre artists, politicians and businessmen, was broadcast life in the 2nd channel of the Polish TV thus granting the music lovers a unique opportunity to meet Ewa Podleś. Now the hurdle for the next winner of the "Golden Sceptre" stands very high. 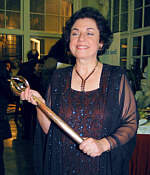