The "Golden Sceptre" for Wiesław Myśliwski

During the ceremony, which was held on 28 November 2011 in the Drama Theatre in Warsaw, passages from the "Treatise on Shelling Beans" by W. Myśliwski were read by Olgierd Łukaszewicz, with a special concert featuring: "Silesian Quartet", "Tangata Quintet" and Trio Eryka Kulma with guests - Maciej Sikała and Piotr Wojtasik. The "Small Sceptre"- a special award from the Laureate, went to the Municipal Public Library in Kije, in Świętokrzyskie Voivodship.

A report from the ceremony of awarding this year's Golden Sceptre as well as the accompanying concert was broadcast on 4 December this year on TVP2.

Author of novels and dramas, in which he has embraced - in creative reference to the great traditions of Polish and international epics as well as equally creative dialogue with an innovative artistic quest for modern psychological prose - an extremely extensive and rich panorama of transformations and revaluations, which took place in Poland in the 20th century.

Mr Myśliwski was born on 25 March 1932 in Dwikozy near Sandomierz. His father, Julian, came from a bourgeois family from Ćmielów, was an army officer, fought in the 1920 Polish - Soviet war, following discharge from the military he became a government official; while Myśliwski's mother, Marianna, graduated from the Zofia and Ignacy Solarz Popular University in Szyce, in her youth being active in ZMW "Wici".

After the war Wiesław Myśliwski went to a gymnasium and general lyceum in Sandomierz, passing his maturity exam in 1951. Under influence of future wife Wacława Stec he decided to study Polish Literature at the Lublin Catholic University, where he graduated in 1956.

In 1955 he had his debut with a review of E. de Greff's novel "The Night is My Light". In the years 1955-1976 he worked for Ludowa Spółdzielnia Wydawnicza publishing house in Warsaw, i.a. as Head of contemporary literature desk and deputy editor-in-chief.

Mr Myśliwski has received many decorations and awards, including: Cavalier's and Officer's Cross of the Order of Rebirth of Poland, State Awards, Gloria Artis Culture Merit Award, Ecce Homo Order. He received a honoris causa degree from the Opolski University and Jan Kochanowski University in Kielce.
In 2011 he received the French award "Grand Prix Littéraire" Saint - Emilion for the "Treatise on Shelling Beans" and the Bogumił Linde Polish-German award, awarded jointly by Göttingen and Toruń. 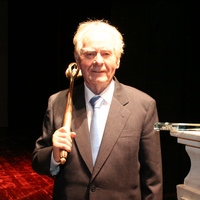